The most ambitious climate research expedition of all time

Produced by Wild Blue Media, backed by us, this high-end documentary will take viewers on a breath-taking and vital expedition to the Arctic to follow an international team of world-renowned climate scientists for an entire year as they undertake crucial research in the most hostile environment on Earth.

The Arctic, the planet’s cooling system, is warming faster than anywhere else on earth, scrambling weather patterns and resulting in extreme weather events such as brutal heatwaves, shock cold spells, and disastrous storms. This is no longer just steady global warming but rapid, volatile changes happening to the world around us.

Arctic Drift [w/t] tells the epic story of the pioneering MOSAiC expedition, coordinated by the Alfred Wegener Institute, Helmholtz Centre for Polar and Marine Research (AWI). Ten years in planning and costing over $150 million, MOSAiC is the largest, and most ambitious climate research project in history involving 500 scientists and experts from 20 nations. With severe temperatures of minus 45 degrees, 150 days without sunlight and more remote than the international space station, documentary filmmakers follow the challenges facing these real-life heroes as they battle the brutal conditions to try and discover previously unobtainable data locked in the delicate climate and eco-system of the Arctic. 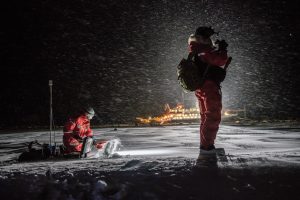 Featuring stunning 4k cinematography and using cutting-edge technology, this landmark documentary chronicles the beauty, danger and extremes of surviving in the Arctic. Trapped in ice that is cracking beneath their feet, the MOSAiC team struggle with challenging conditions for the equipment, setbacks caused by ice storms, curious polar bears, and the onset of the global COVID-19 pandemic in a quest to try and establish the scientific facts of climate change and help protect the very environment that threatens them.

Jens Richter, CEO International, Fremantle said: “A cinematic and visually stunning production, Arctic Drift [w/t] tells the story of the MOSAiC expedition, one of humanity’s greatest efforts to understand how melting at the pole will affect the planet. This gripping documentary combines the vast beauty of the Arctic circle, the importance of scientific research, and the personal struggles of the people putting their lives on the line, in a race against time to understand the Arctic before it changes forever”.

Ashley Morris, Series Producer, Wild Blue Media said: “To most of us the Arctic seems distant and largely irrelevant to our everyday lives, but it’s at the epicentre of climate change, and what’s happening there right now affects each and every one of us. Artic Drift [w/t] takes us on a filmic adventure into the frozen extremes following an intrepid team from all corners of the globe who are on the frontline of climate change science. If they can succeed in this most challenging of expeditions, then there is hope for all of us.”

We are on board to co-develop and finance this international version of the high-end documentary which will be produced for worldwide distribution. Arctic Drift [w/t] is the first in a series of original factual programming coming from the global producer and distributor and was developed through Fremantle’s German label UFA Show & Factual, who secured exclusive access to film MOSAiC. A local version of the show, Expedition Arktis will premiere on ARD.

Kingdom of Dreams set for HBO and Bell Media’s Crave